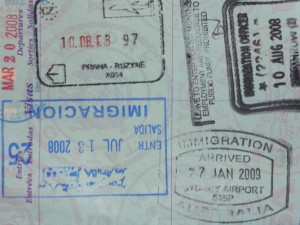 One detail you might have missed in the recent uproar over the Australian Border Force’s involvement in “Operation Fortitude” was the ABF’s understanding of what a border is:

We consider the border not to be a purely physical barrier separating national states, but a complex continuum stretching offshore and onshore, including the overseas, maritime, physical border and domestic dimensions of the border.

That language set ABF up for obvious lines of parody (“the border is just a state of mind, maaan…”) and the inevitable “It’s the vibe of the thing” memes. It all sounded a bit too, well, philosophical for a government department, let alone a newly-uniformed and armed organisation.

It’s certainly an unfamiliar thing when governments start to sound like philosophers, though there is precedent. In the middle of last decade, for instance, the Israeli Defence Force experimented with strategies based on Critical Theory and twentieth century French philosophy, particularly the work of Deleuze. It wasn’t a success, reportedly because “Not every officer in the IDF had the time or the inclination to study postmodern French philosophy.”

But waxing philosophical about borders is a perfectly reasonable thing to do, for borders, in the literal sense, are inherently abstract. They are the legal and cartographic expression of historical, cultural, and political contingencies. Not surprisingly, imposing these abstractions on the physical world sometimes leads to absurdity.

For instance, as a result of a complex set of Medieval treaties and land purchases, the Dutch municipality of Baarle-Nassau contains a patchwork of Belgian enclaves (Baarle-Hertog), some of which themselves contain parcels of Dutch territory, nested like Russian dolls. There are cafes that straddle the border; at one time, when Dutch law imposed early closing time on restaurants, patrons sitting in the Netherlands would simply get up and move to a table on the Belgian side of the room.

And for every such piece of quaint geopolitical trivia, there are uncountable tragedies connected with or occasioned by borders: tragedies of separation, of deprivation, of conflict, of death. We should be thinking hard about borders. They may be abstractions but their impact is desperately real.

In December of 2014, the newly appointed Secretary of the Department of Immigration and Border Protection, Mike Pezzullo, gave a speech on “Sovereignty in an Age of Interdependency” in which he attempted to do just that sort of thinking. It’s a significant speech with far-reaching implications, one that both puts his department’s conceptualisation of borders into context, and unwittingly exposes the very conceptual problems at the heart of how we think about migration.

Pezzullo declared that while the mission of DIBP’s predecessor institutions going back to 1945 had been one of nation-building, now it was one of negotiating the tension between the openness required by globalization and the post-Westphalian state’s “ancient coding as a vehicle for territoriality and exclusion”:

I see them [borders] as mediating between the imperatives of the global order, with its bias towards the flow of people, goods, capital, data and knowledge, and the inherent territoriality and capacity for exclusion which comes with state sovereignty.

In the simplest of terms, modern states demand the right to determine how they will live within their own boundaries, but also seek the benefits of open movement of goods and people and of a rule-governed international order. The tension here is that we claim the right to make rules for ourselves while living in a broader environment that requires us to subject ourselves to external rules if we are gain certain benefits.

In that context, ABF’s “complex continuum” model of the border makes more sense. But it also draws our attention to what that border really amounts to.

The language of ‘border protection’ is useful for governments, as it conjures
up images of patrolling a physical frontier, of keeping a walled populace safe from a hostile world without. That we’re now being told this wall is in fact a “continuum” that exists all the way to Flinders Street (even if Fortitude is what the ABF regards as a “behind the border” operation) gives the lie to this imagery. Entitlements to remain in a country aren’t created by borders, but the other way around: borders exist because of such entitlements. They are functions of a right that states claim for themselves, a right that Pezzullo sums up as being “able to determine who and what has the right, or gift, of entry or exit, and under what conditions.”

As I’ve argued here before, part of what makes the problem of asylum seekers so disturbing for us in the developed world is that these people’s very existence calls into question our assumed entitlement to live where we do, as we do. What moral rights does the mere accident of birth bestow upon us? Why should I be rich and safe and the other debased and imperilled? How do we derive rights of territorial exclusion from such sheer contingency?

The more fundamental question raised by this concept of the border is not how to balance sovereignty against the demands of global commerce; the question is what entitles us to make – or withhold – a gift of something we haven’t ourselves earned.

You might reply that rights of abode derive from certain forms of connectedness to the community. The taunt of “I grew here, you flew here” is meant to convey that the speaker has the relevant kind of connections, and so an entitlement to be here, while the ‘newcomer’ does not. But simply being born here doesn’t automatically mean you’re connected to the community, while as the current case of Mojgan Shamsalipoor attests, connection to the community is no protection against the threat of deportation either.

Even if we could establish such a right on the basis of concrete connections, we’d still be left with the more fundamental challenge of whether we have a right to insist on ‘sovereignty’ ahead of our duty of concern for the other. In his speech, Pezzullo speaks of border protection as giving governments the “space” to be “compassionate” towards asylum seekers – phrasing that suggests compassion is somehow one policy option among others rather than a standing moral demand.

He points out that the sheer scale of the global refugee population means no one nation or even group of nations can take on the whole burden themselves. Yet nations already do take on that burden – asylum seekers physically have to be somewhere, after all – so what this really means is that developed nations cannot comfortably take on such burdens. But why simply assume we have a right to be comfortable? What grounds such a right? And just what flows from it?

If our current policy settings are to be believed, almost anything is licensed by our ‘right’ of exclusion, up to and including offshore detention in conditions so horrific it is clearly meant to be a cruel deterrent to anyone who would dare challenge us, not a bureaucratic mechanism for the orderly flow of people across borders.

The spectre of uniformed quasi-police checking papers in the middle of Melbourne rightly disturbed enough of us that it caused an immediate backlash. And while Australia continues to pull its hair out over relatively tiny numbers of “irregular” arrivals, Europe continues to experience appalling tragedies as it struggles to deal with incoming refugees and migrants.

Both these events confront us with what – if anything – underpins our claimed right of exclusion, even in the face of suffering and death. We should indeed be thinking about borders. We just might not like where that thinking takes us.