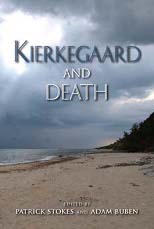 Available from IUP and Amazon

Few philosophers have devoted such sustained, almost obsessive attention to the topic of death as Søren Kierkegaard. Kierkegaard and Death brings together new work on Kierkegaard’s multifaceted discussions of death and provides a thorough guide to the development, in various texts and contexts, of Kierkegaard’s ideas concerning death. Essays by an international group of scholars take up essential topics such as dying to the world, living death, immortality, suicide, mortality and subjectivity, death and the meaning of life, remembrance of the dead, and the question of the afterlife. While bringing Kierkegaard’s philosophy of death into focus, this volume connects Kierkegaard with important debates in contemporary philosophy.

“Kierkegaard and Death succeeds admirably at demonstrating how the Kierkegaardian corpus presents us with something like a philosophy of finite existence, in a way that will open up avenues of further research and should also serve as essential reading for anyone who believes that reflecting on human mortality could perhaps be a fruitful enterprise after all.” – Rick Anthony Furtak, Notre Dame Philosophical Reviews, July 2012