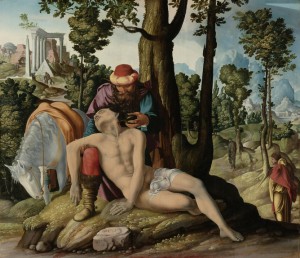 The UNSUBTLEBERG family – MOTHER, FATHER, BROTHER and SISTER – are driving along a lonely country road, on their way to camping holiday.

[They screech to a halt]

FATHER: Wow, that’s quite a crash! That car’s completely wrecked!

BROTHER: Hey, there’s the driver! Over there, by the side of the road!

MOTHER: [unbuckling her belt] Ok, someone grab the blankets and medical kit out of the boot, there’s heaps of bandages in there, and I’ll –

FATHER: Whoa, just a second there, honey. What – what are you doing?

MOTHER: What do you mean, ‘what am I doing?’ That person needs help! We have to help!

FATHER: Well, sure, I agree this is a terrible situation. But it’s not our fault.

FATHER: It’s not our fault. We didn’t cause this accident, and so while it’s good that we feel sympathy here, we’re not obliged to stop and help. And, you know, we have a camping holiday to get to. Though I must say, it’s very much to our credit that we feel so bad for this poor sap. Really speaks to what great people we are that we feel so dreadful.

MOTHER: It may not be our fault – though who knows, maybe we’re all complicit in the condition of country highways – but this person needs help!

FATHER: Yes, but what matters here is that we do what’s just. And there’s no injustice in our driving past: we’re not breaking a promise, or stealing something that’s not ours, or injuring the driver ourselves, or anything like that. So, it’s ok to just drive on.

MOTHER: You don’t think it’s unjust that someone’s dying in a ditch while we’re sitting in a nice warm Audi arguing about what’s just?

FATHER: Unjust? No. Terrible? Sure. But no-one has wronged anybody here, so it’s nobody’s responsibility to do anything. Why should I fix this? I didn’t make the world. Besides, we worked hard for this Audi.

MOTHER: We bought this Audi with the money you inherited from your aunt, and you ‘work hard’ at a job you only got because your parents could afford to send you to private school where you met your future boss.

MOTHER: Look, I’m not talking about obligations in that narrow sense. Circumstance has placed a suffering person into our hands, and that means we’re responsible for what happens to them, even if it’s not our fault. Sucks, but there it is. Now, will somebody please grab the first aid kit from the –

BROTHER: No way, Mum. I mean, yeah, Dad’s right that it’s sad this has happened and all, and it would be very nice of us to help, I agree. But I just think we should look after our own first.

MOTHER: What the actual f-

BROTHER: No, seriously, is that person’s name “Unsubtleberg”? Because we only have so many resources here in this car and we should use them to look after people named Unsubtleberg first.

BROTHER: Well, we’re the Unsubtlebergs. We have the same surname. That means we have special obligations to each other. We’re obliged to put the interests of our family members first, ahead of strangers.

MOTHER: Our ‘interest’ here being that we don’t lose an hour or two out of our camping holiday? You really think the random chance that made you an Unsubtleberg gives you the right to ignore a guy bleeding out not ten feet away from where you sit?

BROTHER: Of course I do. Also I didn’t want to say anything, but I got a papercut a few minutes ago while thumbing through this copy of Clumsy Allegory Enthusiast magazine. Don’t you think we as a family should be tending to our own wounds first before we start helping others?

SISTER: Besides, we’re four people in a mid-sized sedan. What do you want us to do: squish up? That would be less comfortable.

FATHER: And they might bleed all over the upholstery!

BROTHER: Hey look, there’s someone on a bicycle out there! The rider has gone over to the injured person. That means they got there first, so they should take the injured driver to hospital, not us.

MOTHER: On a bicycle? You can’t dink someone to hospital from the middle of nowhere. We’re in a car, so it’s up to us to help.

BROTHER: Why? Just because they need help doesn’t mean they have the right to sit in a nice vehicle. If they’re really injured, being slung over the bars of a ten-speed should be good enough for them, right? Otherwise they’re not even a patient, they’re a hitchhiker.

SISTER: Also, if we stop to help, aren’t we just encouraging accidents? If we rescue people from accidents like this, more and more people will start driving on country roads.

BROTHER: The only thing that really matters here is that we Stop The Traffic.

CYCLIST: I’m… I’m afraid they’re gone. Just a moment ago. I didn’t have any bandages or anything, there was just nothing I could do…

SISTER: Wow. Look at that poor body, lying there like that. Heartbreaking.

BROTHER: I’ll have that image seared into my brain forever.