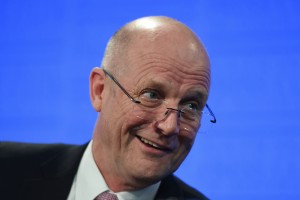 Whatever you think of his views, or of how he came to sit in the Senate, it’s hard to deny that David Leyonhjelm is the real deal: a conviction politician whose positions are governed by principle, not populism.

The problem for his supporters is that Leyonhjelm is exposing the disturbing moral thinness of the libertarian principles he espouses.

In the wake of a parliamentary committee recommending a referendum on constitutional recognition for Indigenous Australians, Leyonhjelm repeated the claim that there’s doubt in anthropological circles that the Aboriginal nations were the first inhabitants of the Australian continent.

That claim struck many as decidedly odd. However, this empirical claim is just one component of a larger position that Leyonhjelm outlined in a speech in March. Appeals to anthropological data and a curious concern not to exclude those who don’t respect Aboriginal culture are just ornaments to his main objection. That comes near the end of his speech, and is both perfectly consistent with his ideological commitments, and perfectly emblematic of what’s wrong with libertarianism:

Every human being in Australia is a person, equal before the law. Giving legal recognition to characteristics held by certain persons – particularly when those characteristics are inherent, like ancestry – represents a perverse sort of racism. Although it appears positive, it still singles some people out on the basis of race.

The problem with talking about equality at this level of abstraction is that it makes the reality of material privilege invisible. And the bigger problem is that for libertarians, and a great many classical liberals, that’s not actually a problem at all.

The majestic equality of the law, which forbids rich and poor alike to sleep under bridges, beg in the streets, and steal loaves of bread.

But if you can strip human beings back to a self so abstract that purely formal equality seems compelling, you can convince yourself that practical disadvantage doesn’t matter. Leyonhjelm’s speech name-checked the Enlightenment, and this is fitting. What emerges from the Enlightenment and its early modern antecedents is, as the philosopher Charles Taylor puts it, a “buffered” self, an autonomous agent impervious to external forces.

The men of the Enlightenment – figures like Locke, Hume, Kant, Jefferson and Rousseau – laid out the value of liberty and the essential dignity of humans spectacularly well, but the humans they were describing looked an awful lot like themselves. Being white, male, heterosexual, well-educated and materially comfortable – qualifications which allow you to pass through the world without the kinds of friction that others encounter – makes it much easier to conceive of yourself as an objective centre of disembodied reason and freedom.

Nor does it have a history. In speaking of everyone “celebrating ancestry”, Leyonhjelm quite explicitly collapses the experiences of an Indigenous Australian, an asylum seeker, and an Anglo-Celt into one very big but very shallow bucket. Racial identity is reduced to “ancestry” and shunted back into a past that’s available for voluntary “celebration” but exerts no real force on the present.

The “buffered self” isn’t buffeted, let alone constrained or determined, by the winds of history. It stands above history just as it stands above embodiment.

And to suggest otherwise? To suggest that history and its sequelae must be acknowledged? Why, that would be singling people out on the basis of their race. That’s racist.

Saving us from ourselves

In some ways this is all in keeping with libertarianism’s refusal to see anything but individual liberty as having decisive moral weight. Freedom, just so we’re clear, is desperately important. It’s one of the main features of the moral landscape that politics must be responsive to. But a myopic focus on individual liberty, linked to a thin conception of persons that sees human dignity simply as the free exercise of autonomy, obscures other vital features of that landscape.

Leyonhjelm has apparently won support for a parliamentary inquiry into the “Nanny State”. Once again, there is commendable philosophical clarity and consistency in his position:

The issue here is, to what extent is the government entitled to legislate – and we’re not talking about just giving advice – but to legislate, to protect you from your own bad choices. Bicycle helmets are a very good example of that: nobody is hurt if you fall off. If you don’t wear a bicycle helmet, your head’s not going to crack into somebody else and damage them.

This is the classic Liberal Harm Principle: no-one is entitled to interfere with your personal behaviour so long as it doesn’t impact on anyone else. Hence if you want to smoke, or ride a bike without a helmet, this is an essentially “personal” matter that no-one else should interfere with.

Leyonhjelm hit back against criticism for apparently being more concerned about the imaginary health effects of wind turbines than the very real health effects of tobacco. Such criticism misses the point: libertarians don’t care what you do to yourself, just to other people. Smoke ‘em if you got ’em.

I’ve noted before that even classical liberals like Mill drew the line at suicide – as this destroys the very freedom that the Harm Principle is meant to respect – though some libertarians such as the late Robert Nozick were prepared to countenance a wider right of self-disposal.

But consider whether you have a right to wrestle a would-be suicide down from a window ledge or bridge. To conclude that this would be an unfair interference in their personal autonomy involves a certain blindness, a whittling of the person down to the point where their only remaining value is rational autonomy. The independent, buffered Enlightenment subject: a pure atomistic locus of self-directed freedom, including the freedom to jump.

What is bled out of that picture is the essential interconnection of persons, grounded in our intersubjective constitution. When John Donne famously declared “no man is an island entire of itself”, he knew exactly what that implied:

Any man’s death diminishes me, because I am involved in mankind. And therefore never send to know for whom the bell tolls; it tolls for thee.

No-one “merely” harms themselves, but inevitably harms those around them in doing so. My life is not entirely my own – nor is its value reducible to my autonomy.

People – real, concrete, loving, feeling, people – matter in deep, distinctive ways, ways that strain the resources of our moral language. And, accordingly, their deaths – which rob the world of something inherently precious – also matter, at least enough for us to sometimes try and save people from their own objectively bad choices. But that sort of thick moral value is lost in the remorseless thinning-down of libertarian calculation.

Even Leyonhjelm’s support of same-sex marriage, for instance, doesn’t seem to be grounded in a view that long-term same-sex relationships are intrinsically good things that deserve access to the same sort of recognition as heterosexual ones, so much as a pervasive dislike of governments saying “no” to people.

Also, when you denude the world of moral pith by abstracting people down into their Enlightenment ghosts in this way, you end up peeling away the level on which real power operates. That makes it easier to pretend we’re now living in some sort of post-racial utopia in which any attempt to redress ongoing power imbalances becomes “reverse racism”.

Equality, it seems, is achieved simply by refusing to acknowledge that inequality remains to be overcome, and by refusing to see the privilege of one’s own position.

Think of Human Rights Commissioner Tim Wilson complaining that that the law – and not just social sanction – prohibits racially loaded terms being used by some people but not others. This misses the point that the words in question aren’t just words used to denigrate minorities: they’re words used by white people to denigrate others.

Wilson doesn’t magically stop being white when he speaks, and he doesn’t get to sidestep the historical meanings of a white man using those words. None of us gets to be the pure monad of ahistorical, acultural reason the Enlightenment imagined us to be.

But this charge of “reverse racism” is deeply attractive from a certain perspective. It’s a way of pretending you can talk about racism, or sexism, or homophobia, without talking about power. That’s comforting for those who sense true equality would mean that they – we – might have to give up some of that power.

Patrick will be on hand for an author Q&A between 3PM and 4PM AEST on Tuesday, June 30. Post your questions in the comments section below.