This piece originally appeared on The Conversation’s Cogito blog 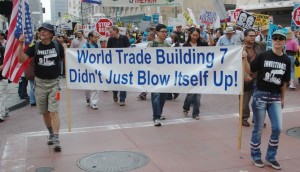 We’ve just seen another mass shooting in the US. This time it was a church, and race hate was the cause. Other times it’s a school, or a cinema, or a university, or a shopping mall.

By now, the script is sickeningly familiar: the numbing details of horror, followed by the bewildered outrage, the backlash that attempts to delimit and isolate and resist any wider analysis, and finally the inevitable failure to act.

But in the age of the internet there’s an extra, ghoulish twist.

Within days, and increasingly, within mere hours and minutes, a tragic event is being filtered through a worldview that insists these events are not what they seem. Conspiracy theorists leap on the tragedy as yet more evidence of dark forces manipulating the world for their own nefarious ends. The kids killed at Sandy Hook Elementary in Newtown, CT? They never existed. Their grieving families? “Crisis actors.” This is all Obama, you see, and his one-world-government comrades staging ‘false flag’ attacks to justify disarming the citizenry. He’s coming for your guns.

And yes, this process has already started around Charleston. Lunar right media identity Alex Jones’ Infowars immediately questioned if the shooting was a “false flag.” Others came out of the woodwork to insist the shooter’s manifesto was a fraud, and that the “shooter” was in fact a 33 year old Marine and former child star of Star Trek: The Next Generation and Doogie Howser MD.

Did you laugh just then? It’s understandable if you did. Most conspiracy theories are, unless you’re the one pushing them, pretty absurdly funny. Conspiracy theorists are always good for a chuckle.

In his critical introduction to conspiracy theories, the sociologist Jovan Byford notes that the academic study of conspiracy theories went through a phase where scholars treated these theories as intriguing pop-culture artefacts that were essentially harmless. In the X-Files-inflected 90s, decades out from the horrific anti-Semitic conspiracy fantasties of Nesta Webster and the Protocols of the Elders of Zion, it was easy to treat conspiracy theory as an exercise of playful postmodern irony. No-one gets hurt, right?

Tell that to Gene Rosen, who helped kids who had fled the shooting at Newtown only to be hounded with abusive phone messages from people accusing him of being a government stooge. Tell that to the families of Grace McDonnell and Chase Kowalski, two seven year olds killed at Newtown, whose parents had to endure a phone call from the man who stole the memorial to their children telling them their children never existed.

But the harmfulness of conspiracy theory arguably goes much deeper than this. It’s not just that conspiracy belief sometimes causes people to do terrible things. It’s that attachment to the conspiracy worldview violates important norms of trust and forbearance that are central to how we relate to each other and the wider world.

Interestingly, the answer is: more rational than we might think. After all, conspiracy theories manage to explain all the loose ends (“errant data”) that the ‘official’ story doesn’t. Viewed purely as a form of inference to best explanation, conspiracy reasoning doesn’t seem to be inherently illogical on its face.

However, as Byford points out, conspiracy theory is a “tradition of explanation” (conspiracy theories don’t arise from nowhere but draw upon earlier narratives, often with deeply problematic origins) that has a shockingly bad strike rate. Real conspiracies have certainly happened – Watergate, Iran-Contra etc. – but how many have ever been uncovered by conspiracy theorists?

Academic discussions of conspiracy theory tend to focus on long-lived varieties, the ones that attract large numbers of adherents around a relatively stable core. It’s that duration that allowed Steve Clarke to analyse these theories using the framework of progressive and degenerating research programs, borrowed from the philosopher of science Imre Lakatos. In science, progressive research programs explain more and more observations and make successful predictions. When confronted by data that seems to disconfirm the theory, they posit ‘auxiliary hypotheses’ that actually strengthen the theory, by allowing it to explain and predict even more.

Degenerating research programs, by contrast, are stuck on the defensive: they don’t explain any new observations, nor make successful predictions, and are constantly having to defend themselves from new data that contradicts the theory. Clarke is right that most conspiracy theories are like that. If the various US shootings are government false flags designed to help Obama implement gun control, why is it taking so long? Shouldn’t at least one whistleblower have come forward?

A conspiracy theorist, led by the inexorable logic of their tradition of explanation, might double down at this point: the conspiracies we think we know about are just covers for the real conspiracies, while the reason conspiracy theory never seems to yield results is that the conspirators are making sure it doesn’t. Absence of evidence isn’t evidence of absence: it’s proof positive of a conspiracy.

You can see how that sort of theorising is, to a certain extent, a frictionless spinning in a void. Any observation confirms the conspiracy, and any data that seems to disconfirm it also confirms it. It’s an ‘explanation’ of observed reality that comes at the cost of making its central beliefs unfalsifiable. But that’s not the only problem.

To believe in conspiracy theory, you must believe in conspirators. To maintain a conspiracy theory for any length of time, you must claim that more and more people are in on the conspiracy. Clinging to degenerating research programs of this type involves making more and more unevidenced accusations against people you know nothing about. That’s not without moral cost. Suspicion should always involve a certain reluctance, a certain forbearance from thinking the worst of people – a virtue that is sacrificed in the name of keeping the conspiracy theory going. In the process, real human tragedy is made into a plaything, fodder for feverish speculation that does no real epistemic or practical work.

Our relationship to each other and to society as a whole also only works against a generalised assumption of trustworthiness. Imagine if you believed by default that everyone is lying to you: how could you possibly function, or even communicate? Laura D’Olimpio recently wrote on Cogito about the importance of trust, and the corresponding vulnerability that requires us to accept. One crucial dimension of trust as a pervasive phenomenon in our lives is its role in our epistemology: most of what we know, we actually take on trust from the testimony of others. I only know that Iceland exists because I don’t believe, to borrow a phrase from Tom Stoppard, in a ‘conspiracy of cartographers.’

To maintain a conspiracy theory requires us to throw out more and more of our socially-mediated sources of knowledge, and to give up more and more of the trust in each other and in our knowledge-generating mechanisms that we are utterly dependent upon. On some level, the ‘conspiracy theory of society’ ultimately asks us to give up on society altogether. And that takes us to a very dangerous place indeed.