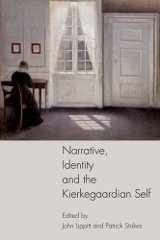 I’m delighted to say that Narrative, Identity and the Kierkegaardian Self is now available.

Edited by John Lippitt and myself, this is the first collection on Kierkegaard and narrative personal identity in over a decade – think of it as Kierkegaard After MacIntyre After Kierkegaard After MacIntyre – and brings together leading narrativists and Kierkegaardians in a new and productive dialogue. This book is one of the outcomes of the Selves in Time project and follows on from the conference we ran at Hertfordshire in November 2011. We hope it will mark an important moment in the ongoing discussion about what Kierkegaard can contribute to our understanding of the self.

But hey, don’t just take my word for it:

‘Are our lives enacted dramatic narratives? Did Kierkegaard understand human existence in these terms? Anyone grappling with these two questions will find in these excellent essays a remarkable catalogue of insights and arguments to be reckoned with in giving an answer. That is no small achievement.’