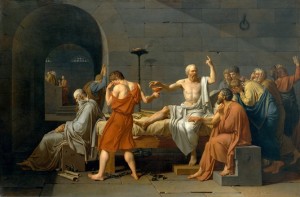 Earlier this year, the ethicist Walter-Sinnot Armstrong asked whether philosophers were out of touch with, even contemptuous, of ordinary people and everyday life. The picture he paints isn’t flattering:

Philosophers love to complain about bad reasoning. How can those other people commit such silly fallacies? Don’t they see how arbitrary and inconsistent their positions are? Aren’t the counter examples obvious? After complaining, philosophers often turn to humor. Can you believe what they said! Ha, ha, ha. Let’s make fun of those stupid people […] It puts us out of touch partly because they cannot touch us: we cannot learn from others if we see them as unworthy of careful attention and charitable interpretation. This tendency also puts us out of touch with society because we cannot touch them: they will not listen to us if we openly show contempt for them.

Those words left me tugging uncomfortably at my collar. A day before I’d taken a swing at commentors on the New York Times’ The Stone blog, where Justin McBrayer had tried to answer the question: why don’t our children think there are moral facts?

You can disagree with the specifics of McBrayer’s causal claim that the way ethics is discussed in schools contributes to universal moral antirealism (roughly, the view that the universe contains no moral facts), but he’s right that antirealism seems to be a great many people’s default view, even if their choices and actions suggest otherwise.

As I’ve said before before, this is a bugbear of mine. Moral antirealism might turn out to be true, but it’s not just obviously true. There are only so many essays and online comments where people don’t even understand the suggestion that ethics might be more than subjective before it starts to get to you.

So page after page of comments on McBrayer’s piece insisting that of course there are no moral facts and it’s ridiculous that a so-called philosopher could think otherwise got me snarky. This, I sneered, is why we can’t have nice things. Here’s a professional moral philosopher trying to explain a matter within his expertise and being dismissed, even belittled, by people who clearly don’t even understand what he’s saying. Why would people simply ignore what he’s saying like this? Would they do this to a scientist, or a surgeon, or a lawyer?

Well, yes, of course they would. We live in an age in which everyone, labouring under the delusion that they are always and everywhere entitled to their own opinion, feels fully equipped to tell experts they are flatly wrong about their area of expertise. So this is in many ways a problem of degree rather than kind.

Philosophy denial, it seems to me, is a somewhat different beast. Philosophy denialists – including a disheartening number of high-profile physicists – deny the value of philosophy itself rather than simply taking issue with specific philosophical claims.

And as Sinnot-Armstrong points out, a large part of that is philosophers’ own fault. He notes that while scientists frequently make an effort to explain what they do to the general public, philosophers don’t do so nearly as often:

As a result, the general public often sees philosophy as an obscure game that is no fun to play. If philosophers do not find some way to communicate the importance of philosophy, we should not be surprised when nobody else understands why philosophy is important.

Fortunately, more and more philosophers are taking up this challenge. This new group blog you’re reading now hopes to be a contribution in that direction. It will feature writing from a team of Australian philosophers committed to the idea that philosophy can’t solely be a purely abstract pursuit, but must also connect with how we live and what we care about.

I say ‘must’ quite deliberately. Put simply, philosophy is too good, and too important, to keep locked up in the academy. Philosophy may appear ‘an obscure game,’ but it’s also uniquely powerful in its ability to illuminate, complicate, and break wide open things we consider settled and clear.

Just as importantly, at its best, philosophy’s probing of the physical, conceptual, logical, aesthetic, and moral universes turns back upon the questioner themselves. It encourages the mental activity we might now call metacognition and the corresponding virtue of metarationality. To use an older language, it teaches us to know ourselves and to know our own limits, how to reason and how to map the limits of our ability to do so. At the core of philosophy lies the Delphic saying that motivates so many of Plato’s dialogues, γνῶθι σεαυτόν: ‘know yourself.’

But here be dragons.

Across twenty-five canonical dialogues (and another ten of dubious authorship) Plato depicts his mentor Socrates down in the market place, asking questions of passers-by. Socrates speaks from a position of professed ignorance. He knows nothing, but he at least knows he knows nothing, which already puts him ahead of his neighbours – who mistakenly think they know a great deal. And so Socrates asks his fellow Athenians about the most fundamental, seemingly obvious matters. Then through careful, incisive, and frequently prolonged questioning, he turns their preconceived understandings on their heads, sometimes reducing his interlocutors to bewildered, humiliated wrecks.

That ended about as well as you’d expect. Socrates saw himself as a “gadfly,” fated “to sting people and whip them into a fury, all in the service of truth.” Gadflies are rarely welcomed. In the Apology, Plato’s account of the trial of 399 BCE in which Socrates was sentenced to death for impiety and corrupting the youth, Socrates describes the general reaction to his method:

… young men of the richer classes, who have not much to do, come about me of their own accord; they like to hear the pretenders examined, and they often imitate me, and examine others themselves; there are plenty of persons, as they soon enough discover, who think that they know something, but really know little or nothing: and then those who are examined by them instead of being angry with themselves are angry with me (Apology 23c-d)

Socrates, it must be said, does himself no favours in the Apology. Given the chance to plead for his life, he simply doubles-down on the things that made the Athenians want to kill him in the first place, and then literally demands a reward for doing so. I once polled a philosophy class at the start of a lecture on the Apology on whether or not the Athenians were right to execute Socrates. Then I polled them on the same question when the lecture finished. Slightly more voted in favour of death the second time around. Socrates, it’s fair to conclude, was just really annoying.

But the deeper point here is that what makes philosophy so powerful is also precisely what makes it so uncomfortable: it dissolves obviousness. It takes things that seem so unimpeachably self-evident we don’t even notice them and throws them into doubt. It shakes the unshakeable and corriges the incorrigible.

That is thrilling, liberating, even intoxicating; but it is also unsettling and even infuriating. Finding out you might have been wrong about things that seem obvious – such as that there are no moral facts, for instance – is rather inconvenient. The snide comments on McBrayer’s article are of a piece with the impatience of Neil Degrasse Tyson and Lawrence Krauss’ impatience with philosophical questions. Philosophy just spins its wheels, gets in the way and slows us down.

My philosophical first love, Søren Kierkegaard, writes his unwieldy masterwork Concluding Unscientific Postscript to Philosophical Fragments from the persona of a certain Johannes Climacus, a thirty year old idler and Socratic gadfly. In an age of increasing reflection, sophistication, and haste, Climacus is on a mission, as Paul Muench points out, to slow his reader down. Oh, so you think you’ve understood the basics, know what’s what, and are impatient to move on to more challenging questions? Really? Linger a while, friend. Have you really understood what the good is, or how you should live, or what it means that you’ll die? Really? You sure?

Welcome to the blog. We hope it gets in your way and slows you down.